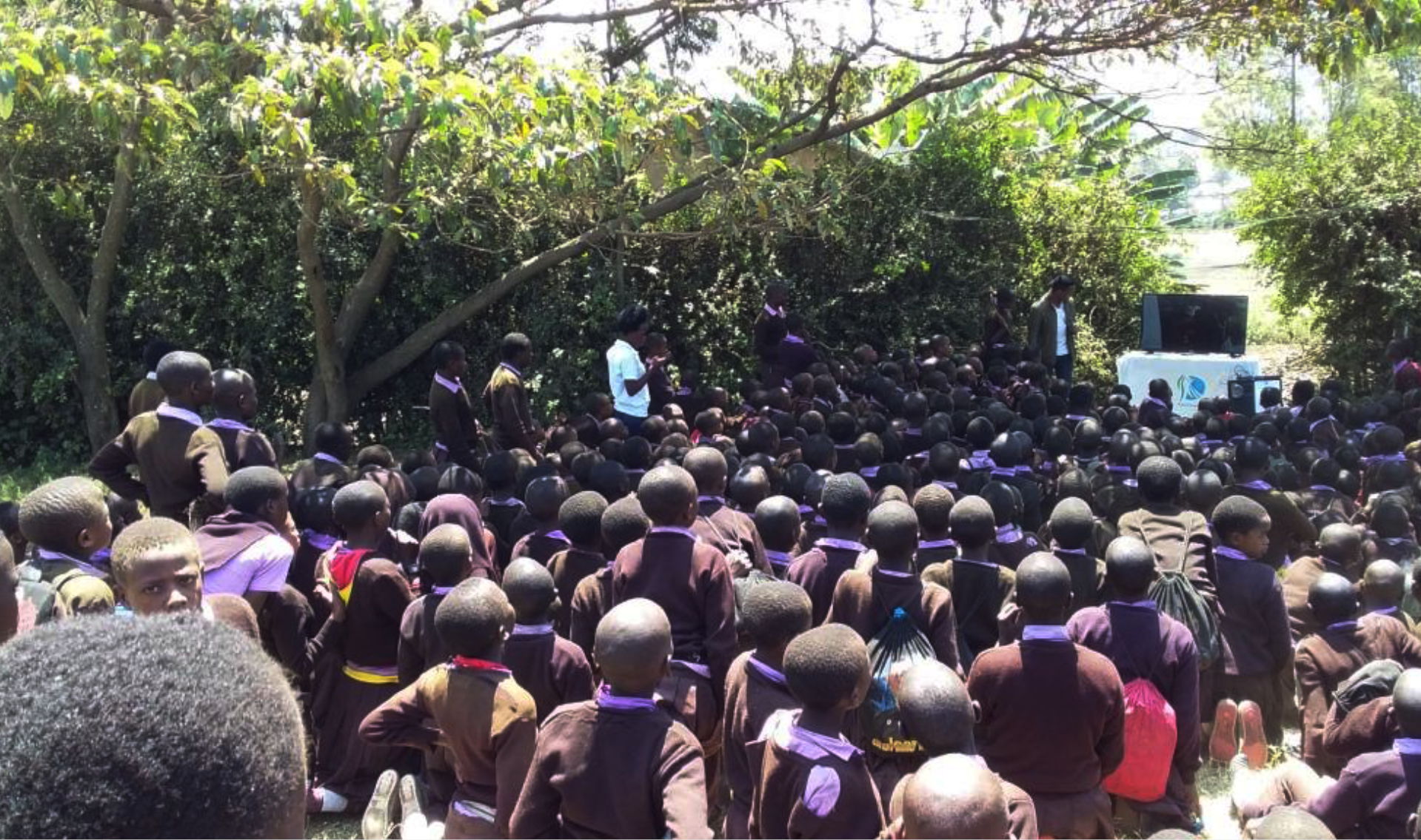 In a small Tanzanian village called Olchorovos, located 17 km from the capital Arusha, hundreds of children and their teachers sit under the shadow of trees, with their eyes on a big screen.

On the TV, a girl not older than 10 years explains to her classmates what Female Genital Cutting (FGC) entails for a girl, emphasising the health and psychological dangers that come with it.

The documentary screened, “In the Name of Your Daughter”, is part of the WHY STORIES series. Directed by Giselle Portenier , the film gives voice to Tanzanian girls as young as 6  years old to tell, in a first person account, how they have experienced FGC or have escaped from their families to avoid it. The screening of the film is possible thanks to a partnership between THE WHY Foundation and Villages Health Support Organisation (VHSO), a local organisation providing medical services as well as knowledge and tools to fight health issues at its source.

The people of Olchorovos do not have access to medical knowledge and care. Like in the majority of rural areas in Tanzania, the nearest hospitals are dozens of kms away and public transport is often non-existent. Volunteer-based, VHSO provides free medical care to people in rural villages in northern Tanzania, who do not have access to healthcare otherwise. The doctors and nurses from the organisation drive out to the villages to provide medical services as well as knowledge and tools to fight health issues at its source. One of their current projects focuses on FGC.

FGC, also known as FGM (Female Genital Mutilation), is a very risky operation in which female genital tissue is damaged and removed. It has no health benefits. On the contrary, it can cause severe bleeding, urinating problems, cysts, infections, complications in childbirth and increased risk of newborn deaths, as explained by the World Health Organisation (WHO).The practice is commonly performed by local midwives, with no medical help nor hygiene, sometimes also resulting in death from haemorrhaging and severe pain.

FGC is recognized internationally as a violation of the human rights of girls and women. Nevertheless, it is a tradition and an unquestioned social norm in many Western, Eastern and North-Eastern African countries, as well as in some countries of the Middle East and Asia. Some communities see FGC as a way of safeguarding girls' virginity, curbing their sexuality, or even protecting them from rape. Not undergoing FGC means risking to be rejected by the community and their own families.

Worldwide, the WHO estimates that over 200 million girls and women alive today have undergone FGC. In Tanzania, even though it is illegal in the country since 1998, the cutting is still largely in practice. In the district of the capital city Arusha, it is estimated by the UNFPA that 41% of girls undergo the procedure. In its neighbouring districts, the situation is not any better: in Dodoma and Manyara, the percentages go up to 47% and 58% of FGC/M cases in girls, respectively.

In Tanzania, even though it is illegal in the country since 1998, FGC is still largely in practice.

FGC is an especially prevalent practice in Masaai communities in the country, where, following the traditions, girls are cut usually between the ages of five and 15, and shortly after stop going to school and are married off.

Changing traditions and culturally rooted beliefs takes time. The practice is of extreme importance for the communities where it is undertaken; ingrained in cultural practice it marks the most important moment in a girl’s life: the passage into adulthood. It is therefore celebrated with a big reunion, dances, music, and food.

The Power of Local Action

“In The Name of Your Daughter” was thought of as a tool to inform the world and communities about the brutality and health dangers of FGC. Many of the girls in the documentary have found refuge at “Safe House”, a home for girls and women who fled their homes for their lives, having a safe place to tell their stories and advocate for the end of horrible human rights abuses. However, places like Safe House are seldom to be found. Throughout the year of 2020, VHSO has been doing an essential work in filling that gap.

Last September, five employees, one nurse and one volunteer from the organisation drove to Olchorovos, which is a Masaai village, to raise awareness about FGC and do health-checks on the village girls. They managed to borrow a TV with a big screen from one of the organisation’s directors and transported it to the village, placing it outside, under the shadows of big trees. They were able to gather school children from six different classes, village leaders and even two midwives, who practice FGC on the village. For those who did not understand English, there was a live translator. After the screening, there was a discussion of the sensible topic of the film with children and elders in the local language.

VHSO’s approach to tackle the issue is to invest in strong relationships with the communities. The organisation’s providing of free medical healthcare, respected and listened to. This is also the reason for which they are able not only to screen films in schools to inform young boys and girls, but also to gather elders, village leaders, parents and even midwives to watch the documentary and let them reason on their practices and beliefs.

Results of the Documentary Screening

In the case of the screening of THE WHY’s documentary, the results were remarkable. After the film, students said they now know they can report anyone forcing them to get cut to police, teachers or nurses. The children also understood how FGC can cause loss of blood and even death and simply that the procedure comprehends means to remove part of the body of girls. The students and viewers were engaged in spreading the word about what they have learned from the film.

As an example of an important shift of perspective, one of the midwives who watched the film told VHSO that she believed FGC was performed to prevent urinary tract infection (UTI). Now that she understands the risks of FGC, the midwife considered refrain from the practice, and, instead will start taking the girls to a hospital if they are suffering from UTI.

The Villages Health Support Organisation is in need of volunteers from anywhere world to help them provide medical help in the many rural villages of Tanzania. Read more on their website and get in touch with them here: info@villageshealthsupport.org