FILM OF THE MONTH: State of Women 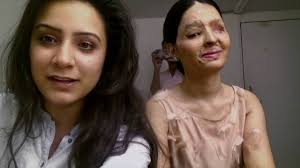 It’s women’s history month and to celebrate women everywhere, we’ve chosen our WHY WOMEN? film State of Women as our film of the month!

State of Women, introduces you to strong women working towards the implementation,protection and promotion of human rights in different stages of transnational advocacy networks. Much of the movie is filmed by the women themselves, allowing them to tell their own stories.

The film introduces you to multiple women all working in their own way towards the realization of gender equality. One such woman is Sonita, a young Afghani rapper, who draws on her experience to create music which raises awareness of child marriage. “Let me scream, I'm tired of being silent” (بذارین داد بزنم،از سکوت خسته شدم),  she raps. Another, Ria Sharma, we meet during her fight to protect acid-attack victims and prevent further attacks as the founder of the non-profit Make Love not Scars. The film also follows the lives of Sarian Kamara, a campaigner against female genital mutilation, Li Ting Ting, a Chinese feminist activist, Helle Thorning Schmidt, former CEO of save the children and former Danish prime minister, The Warning, an all-female rock band, and May Arzaga, a midwife working in the Philippines. The stories of these women form a rich narrative tapestry which highlights the inter-connectivity of struggles for gender equality across different parts of the globe.

You can find the full film under the 'Watch Films' section on our website, or HERE on our YouTube channel.