A Woman Captured screened at the British Embassy in Sofia, Bulgaria 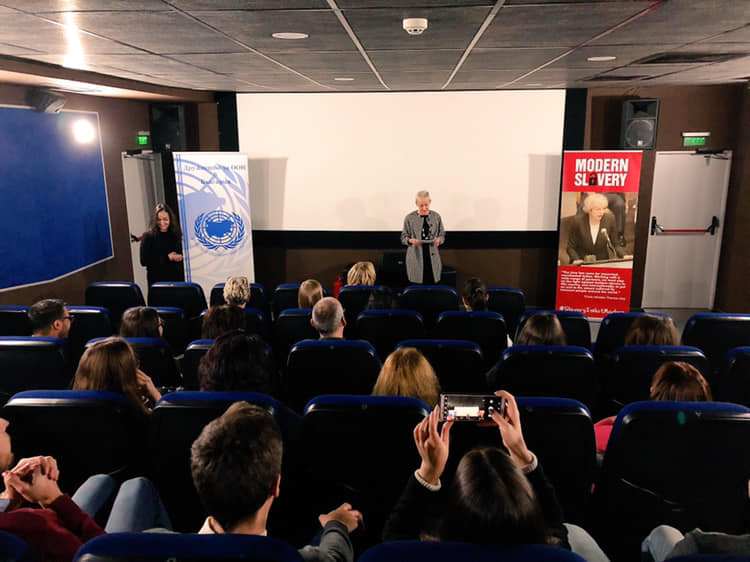 Following the successful internal screening of Maid in Hell at the British Foreign & Commonwealth Office in October, The Why has worked hard to extend its collaboration with diplomatic actors and offices all over the world. Last week, A Woman Captured -  one of the six WHY SLAVERY? films - was screened at the British Embassy in Sofia, Bulgaria, following a similar screening in Beijing.

The film was screened on the 10th of December, which marks the anniversary of the Universal Declaration of Human Rights, to raise awareness of the serious human rights violation that is modern slavery. The screening was hosted at the British Embassy in collaboration with the United Nations Association in Bulgaria. Before the film screening, the Deputy Ambassador Lynne Charles and Professor Petranka Fileva from the United Nations Associations held an opening speech, followed by a presentation of the new Human Rights Declaration booklet.

“We all have a responsibility to be watchful for situations of exploitation and trafficking and any other forms of human rights violations and do our best to eliminate these.”

“It opened my eyes to the different aspects of modern slavery – it can literally affect us all. None of the guests expected to see a woman captured for 10 years in her home country.”

‍The intimate portrayal of slavery hidden in plain sight, presented in A Woman Captured, serves as an important reminder of a reality that might be more prevalent than we realise. The feedback we received strengthened our resolve to ensure knowledge about these practices is made widely available across Europe. As according to the Global Slavery Index, at any given day in 2016, 3.6 million men, women and children were living as modern slaves in Europe and Central Asia. We are looking forward to expanding our presence across Europe generally and in Bulgaria in particular, by organising more screenings in collaboration with the UN and local outreach partners.