WHY SLAVERY? Local outreach in Denmark 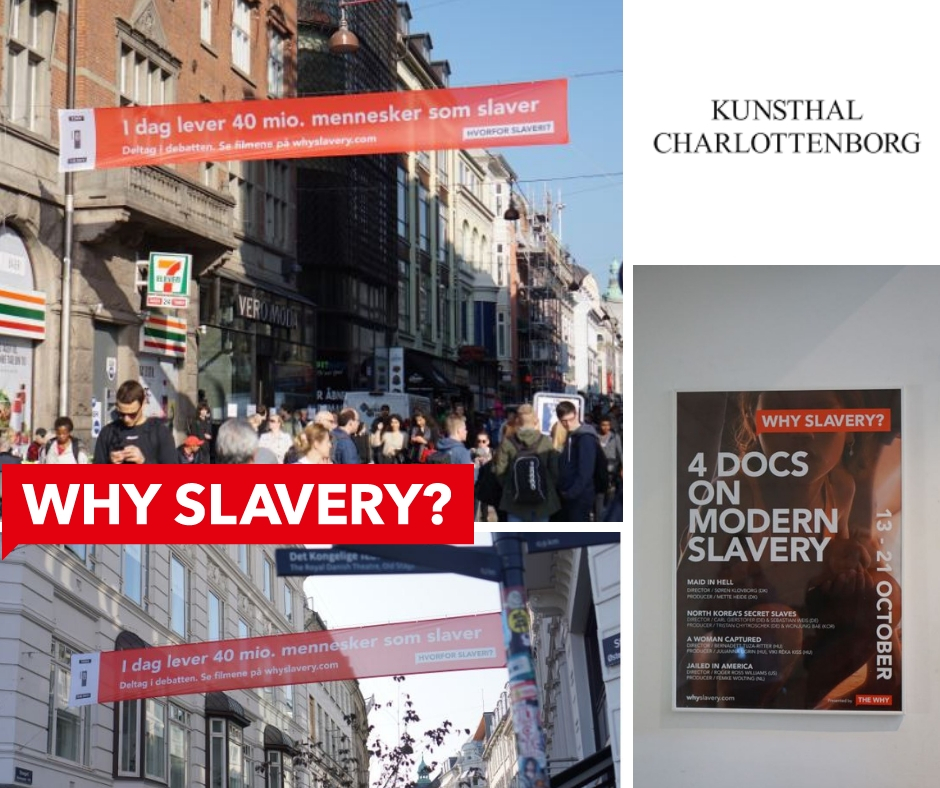 This week has been particularly eventful for THE WHY with the launch of our WHY SLAVERY? campaign. Locally, at our base in Copenhagen we’ve had a number of events taking place: Kunsthal Charlottenborg, one of Denmark’s most renowned contemporary art museums, has exhibited 4 WHY SLAVERY films the past week. Maid in Hell, Jailed in America, North Korea’s Secret Slaves: Dollar Heroes, and A Woman Captured were screened at the start of every full hour, to remind the visitors about the harsh reality faced by millions of men, women and children. The museum is located in the historical heart of Copenhagen, and normally hosts exhibitions by famous artists and designers. Right now, they are showing work by amongst others Bjarke Ingels, the Danish architect. To exhibit our films next to powerful pieces of art and design creates an interesting contrast, encouraging reflection on issues that would normally not be part of a museum setting.

The Women’s Museum in Aarhus was an important and natural collaborating partner for us during the WHY WOMEN? Campaign in 2016. We are very happy that they also took part in the WHY SLAVERY? Campaign by displaying 5 of our short films in their lobby (Maid in Hell, A Woman Captured, I was a Yazidi Slave, Storm makers and One Bride, Seven Cows or a Box of Heroin) an acknowledgment that modern slavery is a serious threat to women all over the world. In fact, around 70% of those stuck in modern slavery are women, facing forced marriages, sexual slavery and being enslaved as domestic servants.

This week marks the start of our public informational campaign in Copenhagen. On a few of the busiest shopping streets in Copenhagen, banners have been put up to inform about the 40 million people trapped in slavery every day. We hope that this campaign will serve as a reminder that our everyday consumption might be contributing to the systematic exploitation of men, women and children around the world. The banners can be seen at Nørreport, Rådhuspladsen, Kongens Nytorv and near the warehouse Illum, and will remain in place for another week.

We've also kicked off a series of free screenings from 3 of our WHY SLAVERY? films at Cinemateket this week, beginning with the award-winning film: A Woman Captured. Screenings of Jailed in America (22/10) and Maid in Hell (26/10) are upcoming - details of which can be found under the events section of our website.